The Day features Dr. Tracy Y. Espy and exciting new initiatives on the horizon for Mitchell. 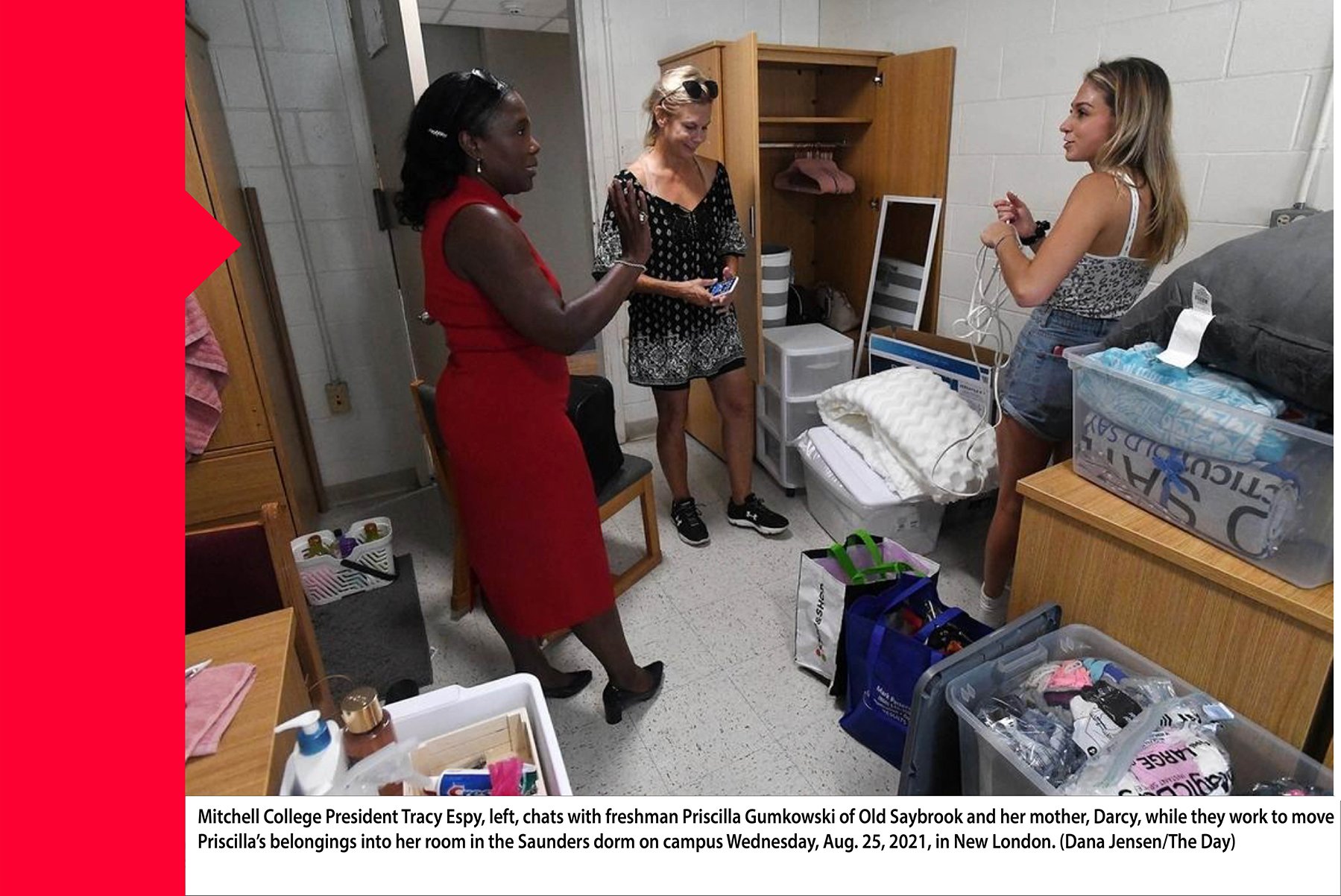 By Erica Moser Day staff writer | As published in The Day

New London — When Tracy Espy got involved in Mitchell College’s search for a new president, she said there were just “some inklings” of COVID-19, and she didn’t know what it would mean.

Now, she’s been president for more than a year and is entering the second fall semester happening during the pandemic.

“I really didn’t know the impact of accepting a presidency during a worldwide pandemic, and also moving, so it’s been a whirlwind, but it’s been a good whirlwind,” said Espy, whose appointment as president was effective July 1 of last year.

She sat down with The Day last week to talk about her first year and what’s ahead.

One of her priorities was setting up a senior leadership team, with a goal of finding people who have a “connection to our mission and vision” and “the ability to lead during a very difficult time in higher education,” Espy said.

Mitchell also recently has announced that it welcomed Elizabeth Ann “Betsy” Beaulieu as vice president of academic affairs and Alicia Martinez as dean of student experience and belonging. Matt Finlayson joined as athletic director at the end of June.

Hilton Kelly, professor of educational studies and Africana studies at Davidson College in North Carolina, will be at Mitchell just for this coming school year, through the American Council on Education Fellows Program, which “enables participants to immerse themselves in the study and practice of leadership.”

Espy said community collaboration is important to her, and students were able to continue internships this past year despite the pandemic. That included hospitality internships at hotels and restaurants, a marine environment internship at a beach in Massachusetts and field work with energy and environmental solutions company Veolia and the University of Connecticut.

Espy said one of her goals is to increase the number of internship partners, and the college received an anonymous gift to support the student internship experience. She said if students want to participate in an internship but faces a hurdle, such as transportation, they can apply for funds.

Also on the topic of community connections, the president said she has conversations once a month with the mayor of New London, superintendent of the Coast Guard Academy and president of Connecticut College.

Amid doing most of her meetings on Zoom last year, Espy said she spent a lot of time just walking through New London and meeting people. Coming from North Carolina and new to this area, she has enjoyed learning about architecture and the college’s history, and eating at local places like Sellfish, On the Waterfront and Ocean Pizza.

What’s ahead
Espy said faculty this year will be developing Mitchell College’s first master’s program, which will be in mental health.

For other program development efforts, she said science, technology, engineering and math are important, as is industry demand. She said she is focused on further aligning the Mitchell Ability Model, which is about teaching adaptability, with workforce needs.

Rep. Joe Courtney, D-2nd District, has secured $555,000 in federal funding for a planned digital innovation hub at Mitchell, which Espy said would provide students badges and certificates in things like data analytics, digital marketing and cybersecurity. Espy said the college also will seek private donations and do additional fundraising.

Mitchell College also recently was selected for a grant to support vocational exploration among students, with Espy saying it’s about helping students explore natural talents that could lead to a career.

Espy said Mitchell is in the final stages of looking at its branding, and is launching its strategic planning process for the next five years.